Bribery Methods in Italy – a Guide 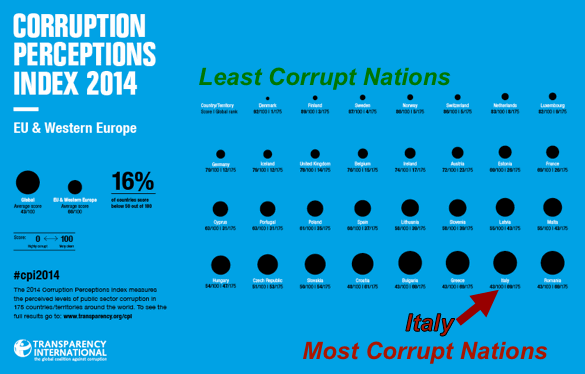 Italy is very slowly, but not so surely, acknowledging that it has a corruption problem. Bribery is rife and the systems employed to pay bribes are highly ingenious too. There’s even the iBribe, would you believe?

Really, Italy has known about its corruption problem for a long time but has been highly reluctant to do much about it, well, the nation’s politicians have been extremely reluctant to act. Could it be that they are the root of the problem? There is lots of evidence to suggest Italy’s politicos are more than happy for bribery to take place. It is almost as if bribery is seen as one of the perks of their highly paid jobs.

Today, though, Italy has anti-corruption czar Raffaele Cantone who is attempting to sort out Italy’s corruption issues and prevent bribery.

So far, Cantone has not got very far and it’s hard to know whether he’s been installed merely to appease the people or whether he will be allowed to intervene and do so effectively. Cantone appears to have the support of Italy’s Prime Minister Matteo Renzi but Mr Renzi leads a party made up in great part of ethically-challenged politicians as recent corruption scandals have shown and continue to show. Not only this, but Mr Renzi needs the support of politicians in other ethically-challenged political parties to push his reforms through. There’s already evidence that Mr Renzi is prepared to keep the ethically-challenged content, and this is not a good sign.

New anti-corruption laws have been passed but seeing as they were drafted by Italy’s ethically-challenged politicians, such laws are unlikely to be very effective and probably won’t reduce bribery levels.

Compounding the problem of punishing the corrupt is the fact that justice in Italy is incredibly slow and few ever end up behind bars for paying or receiving bribes. Even those arrested on accusations of corruption are allowed to stay in their often palatial homes.

Arguably, perhaps, through the decades Italy’s politicians, at both local and national levels, have deftly created a system designed to, if not promote corruption, make it extremely difficult to punish those who are caught.

Vast amounts of public money are wasted investigating and then pursuing cases though Italy’s court system only for the cases to fizzle out owing to flawed time barring laws which more or less guarantee that the corrupt are rarely punished. Even if their guilt is so clear that they are forced into a plea bargaining situation, punishments are reduced to such a level as to render them derisory.

Those caught taking bribes and actually prosecuted disappear below the horizon for a few years before reappearing in some public office or other.

Adding to Italy’s bribery issues is the fact that Italy’s politicos and those disposed towards paying them off have dreamed up many ingenious ways to pay bribes.

How does the bribery system work in Italy? Here are some of the ways in which money changes hands in return for illicit acts and favours.

Buy wine from a politician who’s a wine maker. Need a law? No problem. Offer to buy a few bottles of wine at an inflated price and the law will be yours.

In a similar vein to the wine-bribe, is the purchase copies of books by politicians, or union leaders.

That illusive legislation that would benefit your business may only be a few copies, say 500 or so, of a politician’s autobiography a way.

Italian politician Massimo D’Alema (who also produces wine) – a former prime minister of Italy (soon on trial for bribery), and former finance minister Giulio Tremonti (currently under investigation for accepting a substantial bride) – have sold quite a number of their no doubt scintillating autobiographies to “friends”. What did they receive in return? That’s what investigators are attempting to establish.

If one needs a little legislative assistance or a lucrative public services or construction contract, and no books have been written, one can offer to do up a politician’s house or purchase and decorate a well-located apartment – with a view of Rome’s Coliseum, maybe.

While the actual cost of the refurbishment works may be, for example, around €2,000, with bribe premium added and a few fake invoices to boot, that can be inflated by a few zeros to as much as €200,000. Italy’s former finance minister, Giulio Tremonti became involved in a refurbishment-gate scandal. He, of course, denies any wrongdoing.

Perhaps a refurbishment bribe won’t provide enough cash for a corrupt politician in which case why not buy a nice house for a politician? That friendly law will be yours. The market price for the prime real estate may be around €350,000 but with the bribe premium added, the price may end up being a lot higher. Former Berlusconi government minister Claudio Scajola unknowingly found himself in possession of a lovely apartment with a view of Rome’s Coliseum.

Another little trick in Italy involves selling property to a ‘friend’ at a value well below market value. Said property is then sold on at a vast profit via a pre-arranged transaction. For example: In return for my help – say I awarded you a lucrative construction contract – you sell me an office building for €10 million, only the building is worth €30 million. A friend of mine then buys back the building for €30 million and I make a cool €20 million or so in what appears to be a perfectly transaction.

Alternatively, real estate bribes are simply kept to be sold at leisure: one of Silvio Berlusconi’s close associates, who’s currently in prison, may know something about this lucrative if long term little trick.

Offering a luxury watch or a bespoke suit as gifts to politicians or to members of their families is another way of either rewarding the amicable acts of Italy’s politicians or of ingratiating oneself. Rolexes have almost become synonymous with bribery in Italy, somewhat to the disdain of the watch maker.

One aim of such gift tactics is that these sweeteners will ensure a few lucrative public works contracts will wend their way towards your business. Or else planning permission for a new development may be granted, etc, etc.

If the gift does not do the trick, why not offer an all expenses paid vacation to your political friends? Former governor of the Italian region of Lombardy Roberto Formigoni was allegedly the recipient of vacations paid for by those hoping to win lucrative public works and supply contracts. Mr Formigoni is now a senator of the Italian republic, would you believe?!

Bustarella is Italian vernacular for an envelope stuffed full of cash whereas mazzetta means bribe.  The bustarella is the traditional way of paying off greedy politicians or officials. Only this old method has become hazardous as Italy’s law enforcement authorities now film hand-overs. Wiretapping often helps establish the location of mazzetta handovers.

The parties involved in such illicit exchanges, which either take place out in the open or in someone or other’s offices, then face streams of awkward questions. Arrests may follow and even prosecutions.

Requests for Bustarelle are reputedly relatively common in Italy’s south where local officials will cut through red tape in return for cash donations or a nice new top of the line smartphone – the iBribe?! But it’s not only in the south of Italy that iBribes exist.
A couple of policemen in Milan were arrested on corruption charges after having requested bribes in the form of cash, cell phones and other gifts to expedite residency permits.

Tim Parks, the author of the book ‘Italian Neighbours’ once paid a bustarella.

Other times, bribery in Italy is seen as an, almost, innocent act of generosity.

Mr Berlusconi, who denied the subsequent bribery accusations, has yet to be prosecuted and even if he is, this Italy watcher is willing to bet that his punishment won’t be much of a deterrent.

One suspects that generous Mr Berlusconi has bought off just about every official who counts in Italy. Those he has failed to acquire may well be framed into doing his bidding.

This rather common method is often used at local level in Italy for greasing the hands of ethically-challenged politicians and may involve employing one of the politicians relation’s as a consultant.

In return for rather hazy consultancy services, large sums of cash exchange hands and the existence of invoices legitimises the transactions even if the chances are the consultant did little or nothing to justify their generous fees. These consultancy arrangements are little more than covert bribery.

Sometimes, the wives, brothers, sisters, sons, daughters, uncles, in-laws of Italy politicians end up with plum jobs. One can guess why.

Where does all the Dirty Cash End Up?

In offshore bank accounts – China appears to have become the new Switzerland – or else hidden under mattresses. Sometimes, seemingly innocent third parties ‘lend’ their bank accounts to others to deflect attention. Those ‘others’ are able to access the third party bank accounts at will.

There are other ingenious ways in which bribery functions in Italy and I’ve probably only touched the tip of the rotten iceberg here.

Is Italy getting anywhere in its fight against bribery and corruption? In the opinion of this Italy watcher, no, it isn’t.

Please feel free to add more bribery methods via comments. If you tweet this post, I’ll add yours to it, quips he, corruptly 😉

Beware of Toxic Italian Food from the Triangle of Death

Alarmingly, an area of Italy close to Naples has been christened the Triangle of Death by locals. It

Don’t ask me why my odd little mind ended up considering this, but the fact remains that in

At 39, Italy’s newest Prime Minister, Matteo Renzi, is the youngest premier Italy has ever had. Opinions in A New President for Italy

Voting started today in Italy for a new president to replace Giorgio Napolitiano, 87, whose term of office ends in May. Final UPDATE – April 20, 06:30pm American Ashley Bartner’s enthusiasm for life and living Italy becomes apparent as soon as she starts talking about how she and her husband, highly trained chef Jason Bartner, decided that Italy was the place for them to rent apartments at their La Tavola Marche Agriturismo.

Back in 2007 in the time of the supposedly more democratic Prodi government, Italy’s shady politicians tried to gag Italy’s vociferous bloggers. Well, this time Berlusconi and his cronies are having a go at gagging Italy’s bloggers. Reggio Calabria is home to an extraordinary pair of 2,500-year-old, life-sized bronze statues. In Italian, they’re called “I Bronzi di Riace” or are referred to