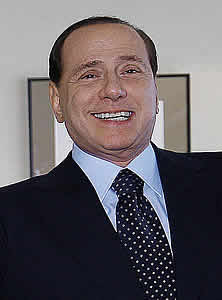 By now most people will know that Italy’s controversial prime minister Silvio Berlusconi is facing charges in connection with prostitution and abuse of office. As you might expect Berlusconi’s case is being managed by two of Italy’s top lawyers.

One is Niccolò Ghedini and the other is Piero Longo, and both are members of Berlusconi’s party and are serving parliamentarians.

With all the pickles which seem to afflict Italy’s premier, these two lawyers must be working overtime, and them some. Berlusconi certainly keeps these esteemed gentlemen rather busy. Both Ghedini and Longo are working on the Rubygate case, the Mills bribery case, and cases concerning the Mediaset and MediaTrade arms of the Berlusconi family’s business empire. Fine, nothing strange there. Or is there?

Both Chamber of Deputies member Ghedini and Senator Longo receive very generous salaries from the Italian state, in other words, they are paid with taxpayers’ money. With all the bother Berlusconi perpetually seems to find himself in, it would be no surprise to learn that Messrs. Ghedini and Longo do not spend an awful lot of time working for the good of their country, unless it can be argued that Berlusconi is Italy.

Additionally, being members of Berlusconi’s PDL party, these two attorneys at law are able to vote through laws and lend their support when, for example, requests to search their client’s premises are made to parliament, as recently happened in Italy. That request was rejected, and one can be fairly certain that Ghedini dutifully voted for his client, er, sorry, Italy’s prime minister. He is hardly likely to vote against him, now is he? After all, it is most likely Berlusconi is paying both Ghedini and Longo large dollops of cash. Or do they work pro bono?

Does this peculiar situation stink a little of ‘conflicts of interest‘? You may well feel so, yet very little seems to be made of this issue in topsy turvy Italy.

One could perhaps be forgiven for thinking that the presence of these two lawyers in parliament and their appearances in court on behalf of Italy’s premier goes against the fundamental concept of Italy’s constitution that all are equal in the eyes of Italy’s law. How can these lawyers be both acting in the interests of Italy and in the interests of Silvio Berlusconi at the same time? Well, they can and they are doing so.

Ghedini’s dual role as both parliamentarian and Berlusconi’s personal lawyer has been criticized by both Italy’s opposition and judiciary, but to date, aside from the criticism, nobody has attempted to take Ghedini to task for what could be viewed as being a conflict of interests between his duty to represent the Italian state in preference to representing the rights of Silvio Berlusconi. Either Ghedini, and Longo, represent Berlusconi or Italy, not both.

It is possible that both these gentlemen contravene the code of ethics for lawyers in Italy.

Take a look at this section of the code of professional ethics for Italian lawyers:

In the exercise of his professional activities, it is a lawyer’s duty to maintain his independence and defend his freedom from external pressures or constraints. A lawyer must not take into account interests relating to his personal sphere. The lawyer shall not engage in business or mediation. […]

Bearing in mind that both Ghedini and Longo are duty bound in parliament – to all intents and purposes – to vote in favour of everything Berlusconi decrees, seeing as they are serving parliamentarians and members of Berlusconi’s party, it could be argued that neither has managed to “maintain his independence and defend his freedom from external pressures or constraints”.

As Berlusconi’s personal lawyers – they have a personal interest – he’s probably paying their fees, at the same time, both are representing Italy (and being paid with taxpayers’ money into the bargain). Further, both Ghedini and Longo are involved in the law making process in Italy, meaning that they cannot really be independent when presenting a case in court.

Judge: Berlusconi’s actions are in clear contravention of Article 123 of the Italian Penal Code.

Ghedini: Not any more, your honour. Article 123 no longer exists. I helped my client vote through its repeal yesterday.

Moreover, the access both Ghedini and Longo have to privileged, possibly confidential, parliamentary information means their client may not be as equal as others in the eyes of Italy’s law. I’m sure many of us would like to be defended by people who can make laws too!

Then there is the European Convention of Human Rights

Under Article 6 of the European Convention of Human Rights, everyone has a right to a fair trial.

But how can a trial be fair if the lawyers sit on both sides of the fence as both lawmakers and defence lawyers – as Ghedini and Longo are?

It would appear that any trial at which these two lawyers appear and represent Silvio Berlusconi cannot be fair – in that Ghedini and Longo can exploit their positions to ensure that the trial is, how can one put this – too fair. So fair, in fact, it could possibly be argued that it becomes unfair, and leans towards breaching the sense of Article 6. Or, perhaps, setting a precedent.

Future defendants in cases both in Italy and elsewhere in the European Union could claim that their trials are not fair because their lawyers are unable to make laws.

What do you think? Italy is a land of hidden gastronomic delights. Interesting food is everywhere, but, surprisingly, even Italian’s themselves don’t know the full extent of all the edible goodies Italy contains.

Yesterday, a sizable tornado hit an area of Venice in Italy causing extensive damage. The event reportedly left one

Take a Leek and add some Pecorino

Those who hail from my homeland may think that the humble leek belongs in that small corner of the UK dominated by sheep and male voice choirs, namely Wales.

How is Renzi’s Italy Coming Along?

Corruption Begins in the Cradle in Italy

At this time last year, Italy’s judiciary issued a warning. The judges stated that there were signs that levels of corruption, a problem which has long dogged Italy, were once again upon the increase.

Credit Crunch Not Biting in Italy

The credit crunch, credit crisis or whatever you want to call it doesn’t seem to be worrying Italy too much. Stop reading, start speaking Stop

The new king of the Catholics

We’re pretty lucky really. There are quite a few interesting restaurants dotted around the area of Milan in which we live. Indeed, there is an excellent little restaurant literally two minutes walk from our house.