Swinging in Italy – the Perugia BigBand

I’ve always quite liked the sound of big bands, perhaps it’s because I’m oldish, but for me there’s always been something appealing about the big bands sound so I was more than happy to see the Perugia BigBand had started following Italy’s Chronicles’ @newsfromitaly persona on Twitter, along with 14,000 or so others.

Well, the first thing I do when I see a musician or band is following me is hop over to their website, blog or Facebook page to see if they are on YouTube and the Perugia BigBand is, even if the videos are actually ‘audios’ with no footage, alas. Then, of course, I’ll have a listen. I did, and I liked what I heard, and I hope you do too.

Led by Ferdinando “Nando” Roselletti, the 20 piece Perugia BigBand has a great jazzy swing sound too, as you will hear from the following YouTube, er, audios.

If you are a jazz fan, you will probably have heard of the legendary Umbria jazz festival. Umbria, it seems, has jazz in its DNA. Umbria Jazz, by the way, runs from July 5 to 14, 2013, though finding a place to stay may not be too easy. I don’t think the Perugia BigBand is performing there though.

Right, on to the big band music. First of all, here’s this track, recorded live in Nettuno in 2002 (!) with vocalist Silvia Pierucci.

I’ve Got You Under My Skin by the Perugia BigBand

Next up for your listening pleasure is this instrumental piece:

Shiny Stockings by the Perugia BigBand

The Perugia BigBand has a blog, a Facebook page and is on Twitter too: Perugia Big Band

Whether you can hire them for a wedding, corporate bash or some other event I don’t know as it’s not too clear from their web presence, although I’d be surprised if you can’t ask them to play for you.

Please, Perugia BigBand, can you put a little more of your music on the www? And let us know where we can hear your dulcet tones live too? Thanks!

It was busy: A photo of Chris, a regular, at the 442, with a friend called Valentina: Yours

Who will win Italy’s elections? That is what everyone wants to know, but the outcome will not be

On the train and around town

We headed off for Genova at the weekend and we had quite an interesting train journey. Sitting opposite,

Italy Doesn’t Give a Damn about Tourists

Things are boiling away over in the comments on my post on Speeding and other traffic fines in Italy as a result of yet more motorists being caught out by the Pisa ZTL honey trap.

The Guardian online has also written about this issue, and in response to an email I sent the newspaper, is looking into the matter. But Italy does not care.

Work Around to WordPress 2.5 inserting images into posts

OK, this is pretty simple. If you cannot actually get those pictures into posts via WordPress 2.5’s new image management thingy, you can usually see 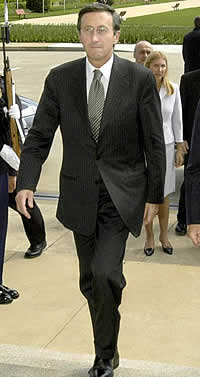 After the recent defeats for the Berlusconi government in local elections, there is much talk of cuts in Italy. Tax rates are to be cut,

Very shortly it looks as if Italy’s prime minister Silvio Berlusconi is going to receive a summons to appear in court on charges of having paid for illegal sex with a minor.

That minor Ruby, who was 17 at the time and thus below the age of consent for prostitutes, which is 18 in Italy, is denying having had sex with Berlusconi.