Well, I have finally got round to scribbling something about our 'holiday' in Sharm. Here it is:

The bombings dampened even further our already fading holiday spirit and the only really good memory I have is of the final day when I spent the morning snorkelling off a crowded beach which I had managed to reach after having flagged down one of the only non-English speaking taxi drivers in the area.

I am no diver, but I can certainly understand why the area is regarded as a divers paradise. The sights you see underwater are fantastic. I even discovered that there are a number of biggish sharks in the seas there, this disconcerted me a little, and I could have sworn that I heard an announcement warning everyone out of the water due to some tell-tale fins. Then again, I was possibly being paranoid.

It was the final day when Martin, our three year old started to get all unsettled and wanted to go home. We weren't sure what was up until his left eye started to become redder and redder. Our flight was at midnight that night, so we had a long wait before jumping on our plane. Our little one was sick at the airport and his eye started to swell. We hoped nobody would notice and stop us from heading for home. Luckily nobody did, thankfully.

The eye swelled up good and proper on the plane. We got home at 4 in the morning, had a sort of sleep and woke up at 9ish. The eye was even worse. Call taxi, head for the casualty department of our usual hospital.

Our son's two week say in hospital was about to begin.

We have not really talked about the holiday since.

The Ukraine – Why Italy is Treading Carefully

The situation in the Ukraine is still explosive. For now, nobody knows just what is going to happen.

The works of my Italian artist friend Gaetano Fiore are going to be on show as part of the Post-Avanguardia exhibition which opens a little latter this month in the Castello Estenese in Ferrara, I’m pleased to announce.

That soap which is life.

Soaps or soap operas are the bread and butter of the TV industry the world over.  However, when As part of a series of occasional articles on Italy’s spooky sides, here is something about the ghost of Monselice Castle, a place where adulterous

Mesothelioma and Asbestosis in Italy

Around 1,200 cases of mesothelioma occur every year in Italy. Up until the end of the 1980s, Italy’s production of asbestos was second only to that of Russia. Asbestos was also used widely in Italy, until its use was banned in 1992.

November and the fog that isn’t

About five or six years ago, maybe longer, I can’t remember exactly, I bought one of those rather daft, but very practical Russian style rabbit skin hats – very similar to the one in the picture: 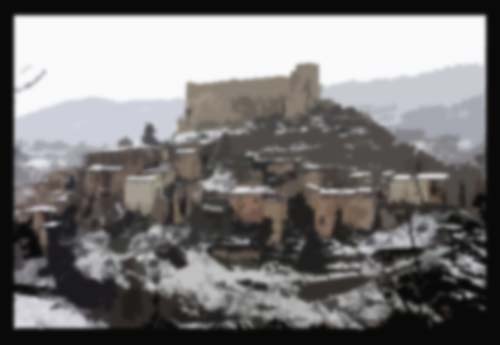 Guess Where in Italy? Part 15

Italy, even if it does n0t make great play of the fact, has plenty of castles dotted around the country. Some fall into the fairytale category, while others would not look too out of place in the film such as Lord of the Rings or some medieval romp or other.

How well do you know Italy’s castles? Let’s see with this week’s photo manipulated brain teaser!